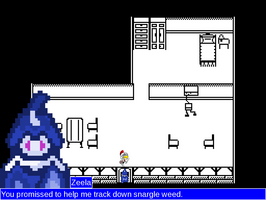 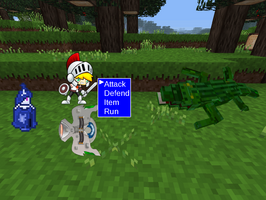 OpenGameArt Movie Video Game was an idea I had for OpenGameArt.org's Summer 2017 Game Jam. The idea being similar to the Lego Movie. I would take a bunch of artwork from OpenGameArt.org in different styles. The villain wanted to convert everything to one consistent style of the Liberated Pixel Cup.

At the time I learned of the game jam, it was half over. I did some searching for a suitable RPG engine since I wouldn't be able to write a complete RPG engine in time. Unfortunately I didn't find any open source project which could do what I envisioned.

Some preparation work was done in November 2017. I used the idea for my novel for NaNoWriMo. Even though the OpenGameArt Movie Novel didn't have pictures I searched for images for characters and creatures before adding them to the story.

In October 2018, I once again debated entry into The Fall All-OGA Game Jam! 2018. A variety of things prevented my participation. Towards the end of October the humble bundle had an rpg maker bundle. To my surprise they had a Linux port for RPG Maker MV. While looking around for more information, I found the Indie Game Making Contest 2018.

Too much time was spent on making the combat system. For an RPG engine it seemed reasonable you needed to explore a world and fight. A lot of development went into those two features. Neither of those really distinguish the game from any other RPG. The final release dropped combat but the time was already lost. I should have skipped it entirely focused on the distinguishing features.

The original concept had the game based on a movie which didn't exist. I decided that a key feature was going to be making you the director of the movie. Specifically when a new character was added to the party you would decide how to cast the part.

For example, the novel had a character Inmax. The character is a spaceship and only makes beeping noises. It has no crew and instead is run by an artificial intelligence. You could decide to cast a different ship. This once could be a living ship that is still just a child. It speaks without stopping for spaces so every word runs together. Or you could decide that science fiction in the fantasy setting is dumb and cast a fairy with a bow to replace the spaceship.

Just before the end of the contest, a friend suggested expanding the movie element of the game. Make it so there is an achievement for completing the game on time and under budget. Each spell cast would increase the cost of special effects. Perhaps have you replaced as director in certain circumstances. I loved the idea.

In the novel, Andy's house was burned down. The maps were created with the Tiled program. It allowed multiple layers. I enabled the code to turn on layers at different points to allow me to easily alter the map. Unfortunately I was never able to implement that part of the story.

Part of the reason for using OpenGameArt.org was to eliminate the need to make artwork. The site was a great resource but not quite as sufficient as I'd hoped. I used a great one bit tileset for the one bit part of town but it had no interiors. When I wanted to make the inside for Andy's house, I had to design new art.

Some time was wasted on artwork that wasn't important. I wanted a sage in the same style on the knight. But the character was killed right at the beginning. I should have just used a placeholder in a different style or dropped the character entirely.

You weren't allowed to start your game before the contest but you could reuse anything created before the contest which wasn't made specifically for your game. The controller code came from my Troll Bridge game. A bit field class came from Bt Builder. The dialog/interaction system came from Color Monsters along with parser for Tiled files.

I first used Tiled program when helping with Tuxemon. It was very helpful for creating maps easily. Tuxemon used it to define events and NPCs on the map. I found a text editor to be a better tool for that. Color Monsters converted the maps to import them into the program. For OpenGameArt Movie Video Game, I just loaded the Tiled file and a separate script file. For a final release, I would combine them together but for prototyping this worked well.

In 2017 even if I had noticed the contest at the beginning, I couldn't have written an RPG engine to implement the game. The development of Color Monsters aided a lot in this game. While the user interface code from Color Monsters couldn't be directly used, the experience allowed me to construct the new code quickly.

The work done for the novel eliminated tracking down a lot of artwork. It provided a basic outline for events even if more would need to be added. Some of the dialog was taken directly from those pages. It did have some downsides as it was not intended to used to develop a game from it. Sometimes I had to search in the document to find something.

What can we learn?

Game jams should not be used to develop a complex new engine. Even one month part time was not going to get it to the level of polish needed. I needed to focus on what is the selling point of your game. While I'm disappointed I didn't complete more of the game, the code is a good base for future development.

Fight to preserve the diversity of art styles.